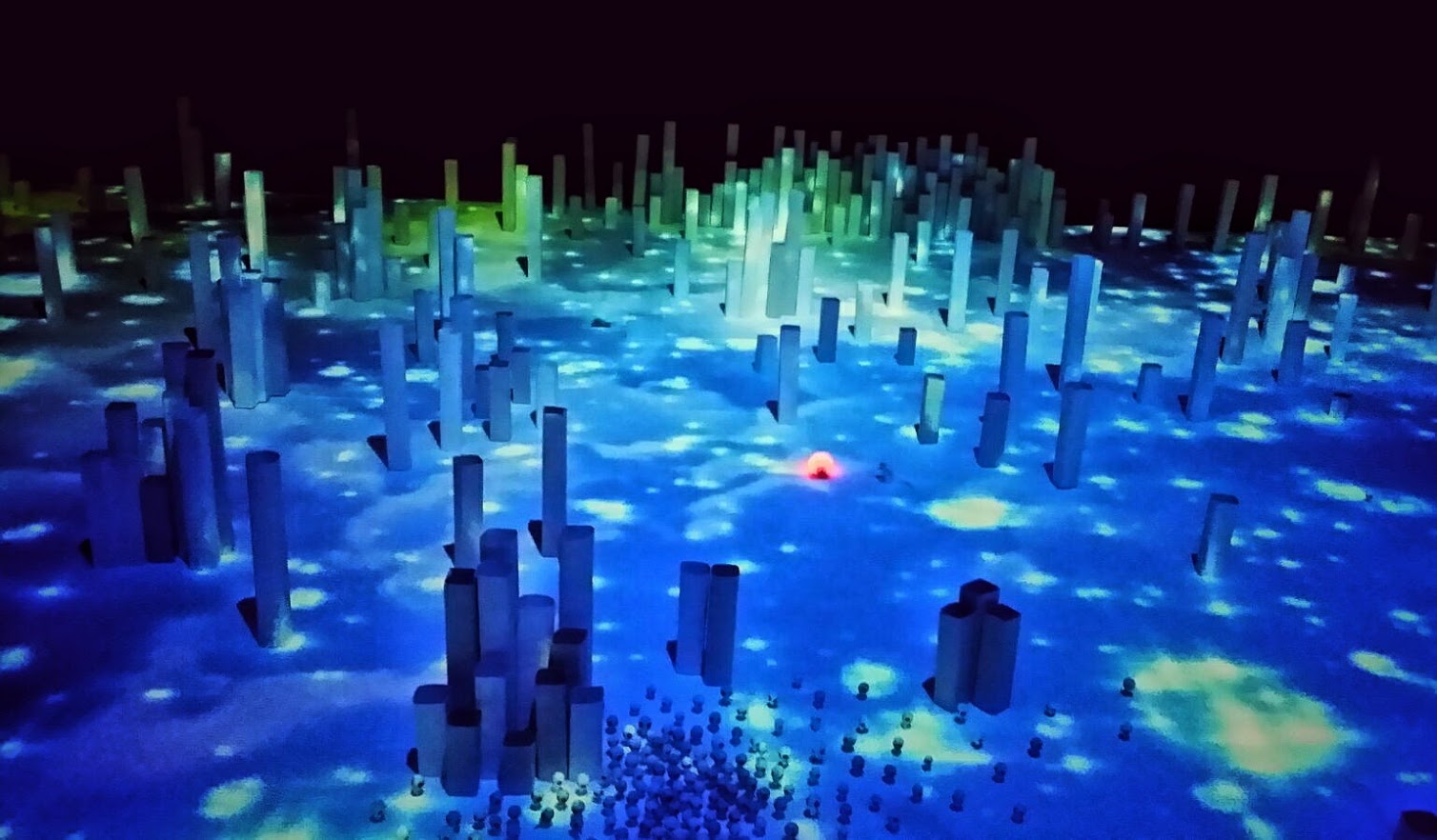 Karla Kracht and Andres Beladiez are a duo of interdisciplinary experimental artists who do mainly cinematic performance and installation. Karla, a German artist who majored in animation and illustration, has created various experimental video-based works and has been collaborating with Andres, a theatre director. The meeting between Karla, who drew or created animated characters and filmed their movement, and Andres, who produced interactive dramaturgies with viewers through various stage techniques, was very natural. As though a cute but bizarre character appears in a city like a monster and reveals the back side of modern people who calmly play a peaceful and beautiful life, their video performances disclose social and political problems facing modern people living today. What these two artists make together are things that belong to “stage,” “sculpture” or “installation” arts, but strictly speaking, they are closer to “apparat.” If so, what is the “apparat” for? Their works are represented by video images that move sequentially, being connected to computers that synchronize several cameras and projectors. Change of images are created by synchronized signals from image editors that move layers of timeline at high speed or from sensors that capture the movement of viewers. Characters in their works play disasters faced by the modern industrial society.

Vilem Flusser, a media philosopher in Germany, defines his camera as an “apparat” in his book on photography and notes that the Latin word of apparatus, the origin word of “apparat”, came from the verb apparare (prepare). He explains that the “apparat” is described as “a state of waiting for something in expectation” in the sense that a camera has the nature of a beast that bares its teeth and awaits its prey. The installation work of Karla and Andres is conceived as an apparat awaiting the movement of viewers. The apparat comes alive and moves like a scene of a fairy tale where a spell is broken and everything is awakened once a viewer appears. Flusser once said that the invention of cameras required artists to program the outer world as an act of art, and likewise, contemporary artists build a utopian interface through programming. This interface is not as simple as the camera device that he mentions. We are already in an era when we cannot see the back side of technologies that we as humans create. They just live their own lives as programs. We have entered an era where artificial intelligence outdoes humans through self-learning.

In Karla and Andres’ work, 2062, a huge city made of paper appears on the front of an image projection. Behind a forest of buildings in the giant city, a long-beaked bird drawn by Karla slips through somewhere either the sky or the background of buildings. Ceramic characters that look like small dolls face various situations in the dark and gloomy maze-like city. Following the movement of sensors synchronized with the movement of viewers, the camera projects images of specific situations and people in close-up on the stage: the World Trade Center reminiscent of the 9/11 terrorist attack, a young man in front of a tank at Tiananmen Square in 1989, and people facing the disaster of Fukushima nuclear power plant. The big-headed, alien-looking characters gaze with big and horrified eyes at the spectators who seem to be under the illusion that they are in the Kingdom of the Little People. The city full of buildings on the stage represents not just a specific city but all cities on the planet. Today, the world is rapidly urbanizing, and big and small events are happening every day in cities connected to the Internet. For Karla and Andres, a “city” is a “theater of disasters” that is confronted by a series of disasters.