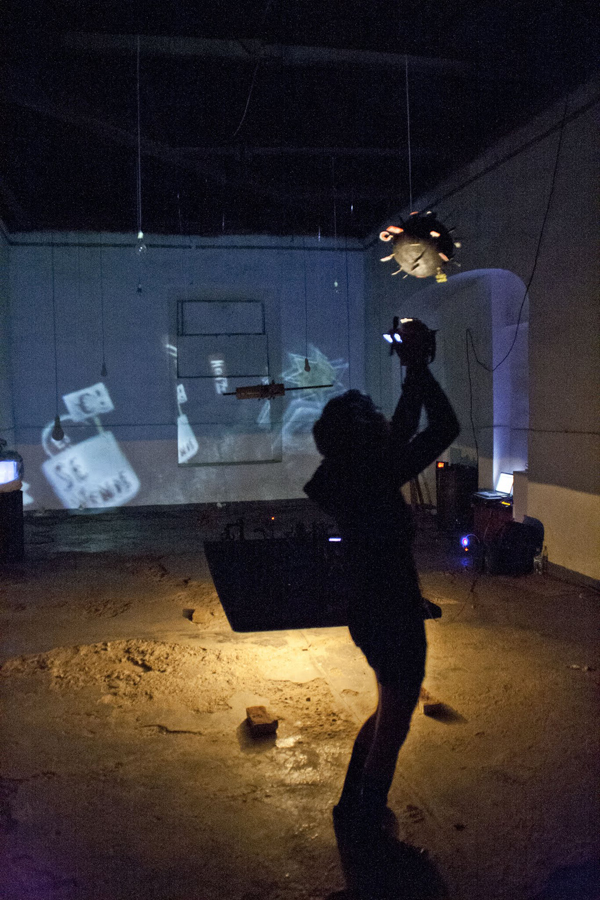 ZOOMWOOZ at Off- Limits 1st of august 2013: Karla y Andrés

The title credits presented as if a pastry chef showed his roller before starting the cake. Multiple ingredients, containers and kitchen gear.

A multitude of moulds that suggest the habitat of the dark lives of characters that once have been humans, white background to strengthen the shadow effects, light, a video camera that still uses tapes. The dozens of post-human characters are designed in a comic/philosophic/biologic/fictional-art aesthetic. Models of planets that remind of our formerly Blue Planet, which it is less every day (and every time less, unfortunately it turns more and more into black), plagued by giant and admonishing advertising billboards.

Sequences that remind of the air journeys of Blade Runner’s flying machines (without focusing on any specific building, but travelling over the whole city). Oppressed lives like those of the characters of George Orwell’s 1984.

The music helps to create bleakness in the spectator, sounds of ambulance horns and/or of the police (apparently recorded in Cochabamba). The camera travelling is not necessarily a prefixed itinerary, but incontrovertibly a troublemaker, and I understate.

Nightmare creatures, efficient play of light and shadow, ready to highlight what Karla and Andrés want to emphasis. The major part of humanity is immersed in misery, in the disgrace favoured by the growing avarice of multinationals that infer in our lives, exceeding limits they’d never would admit.

Apparently the light is filtered by slides that were taken during a honeymoon in Africa in the early 70s. This is not a bad metaphor: the African light of the 70s gives some light to the so unpleasant western world´s future. Such as Detroit ceases for its own capacity of creating capital, the western world dies for not sharing the sense of having what one needs and not sharing with those who have very little… for the very dark and shady reason that power structures have.

Karla and Andrés seduce the privileged spectators with their wonderful visual performance. Yes, the privileged attendants of their presentation at Offlimits Gallery in Madrid,  on the 1st of August. Privileged  are also the attendants of any former show of this unique camera play, illustrations, music and the tender black humour and so the future attendants will be.

I insist in privileged, because thanks to this performance one returns with joy to the scenic arts, the aesthetic innovation, one regains the love for the magic in a live show. With very simple elements, interconnected amongst them, with lots of love toward beauty and the human being, mother nature and the imagination that unites all, though some endeavour in forgetting.